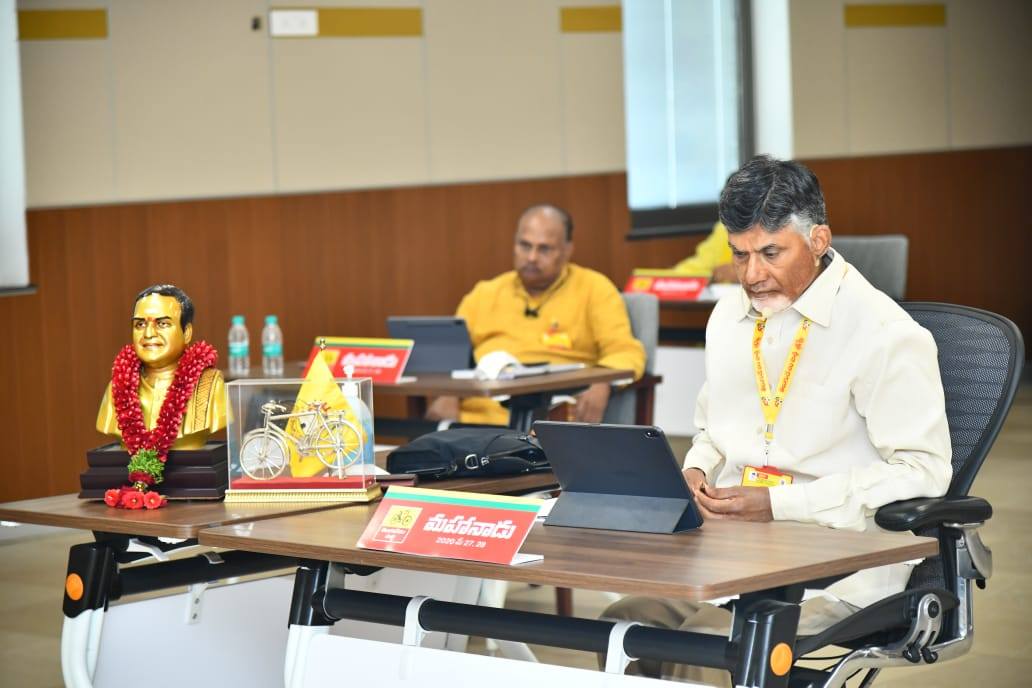 AMARAVATI: The Telugu Desam Party (TDP) has expressed concern that Andhra Pradesh would be left devastated if a second wave of Coronavirus outbreak hits the State which was already suffering on account of the ruling YSR Congress Party excesses in a variety of corruption scams.

The Opposition party said if predictions on the second outbreak come true, the already ailing State economy would be the worst hit with its growth rate likely to slip into negative mode, touching -10 per cent. On the other hand, the Guntur market has become like a Koyambedu virus cluster threatening to spread infections to remote interior areas in coastal districts. The Government should place special focus on preventive measures at all the markets in the State considering the volatility of the situation.

The TDP has held a virtual politburo meeting presided by party National President and former Chief Minister N Chandrababu Naidu. Senior leaders took part from both the Telugu States. They suggested AP Government to take advantage of the 'One Nation and One Agricultural Market' programme launched by the Modi Government at the Centre to enable farmers to sell their produce anywhere in the country. The Central Governemnt was now bringing amendments to the Electricity Act mainly because of the thoughtless review of Power Purchase Agreements by the Jagan Reddy Government in AP.

Stating that welfare took a backseat, the TDP senior leaders said YCP leaders were making tall claims though the cash transfer benefit was not given to two-thirds of the total 6 lakh drivers in the state. Even these one-third beneficiaries were being made to pay back in the form of penalties and fines. The DWCRA women members were deploring that they have received far less amounts towards interest waiver and it was very nominal compared to the promises made by the ruling party leaders.

The TDP decided to hold its online politburo meeting every month to discuss the burning issues confronting the people. Similar periodical meetings would be held with the party elected representatives, incharges, district level leaders and mandal leaders. District level political coordination committees will be set up soon to step up the party activities on people's issues.

The TDP leaders pointed out that the YCP Government's multiple scams in sand, water, cement and so on were getting exposed by the ruling party's MLAs and MPs themselves. The ruling party leaders themselves were calling Jagan Reddy a fraud, a bogus person and a bluff master. One YCP MLA said that not a single rupee worth development took place under Jagan rule so far, another legislator complained against vicious sale of water from a huge reservoir project. A YCP MP deplored that forcible collections were being taken for sanctions of free Government house sites to poor people. One ruling party MLA blamed the Government for sitting silent while sand lorries were getting disappeared between the sand reaches and the stock points.

Expressing concern over supply of liquor which is injurious to health, the TDP leaders said the rates of this harmful liquor were arbitrarily increased which was forcing the poor people to take spirit. It was unfortunate that 7 persons died after taking the surgical spirit. The poor people's lives were falling in danger because of the indifferent and atrocious policies of YCP rule. While National Green Tribunal has blamed human error for LG Polymers gas tragedy which left 14 persons killed, the Chief Minister and his ministers continued to support the company which was heinous and condemnable.

The TDP accused ruling YCP of launching attacks and filing false cases against 800 of their party activities in the State. Over eight TDP activists were murdered while seven others committed suicides. About 225 BC families, 42 minorities, 78 dalit, 11 ST and 228 OC families came under attacks and harassment by YCP in one year. Even now, mango trees were cut down at Brahmasamudram in Anantapur district.