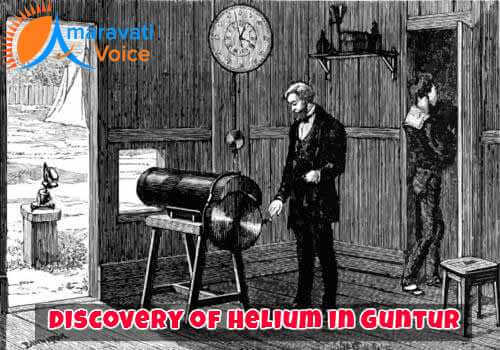 Summary: Most of us know that helium is a gas used in balloons, blimps and even airships. What more do you know about its connection with Guntur? Let us find here.

Discovery of Helium - The second element of Periodic Table, Helium is contributed by the discovery in Guntur!

When hearing the term ‘helium’ most of us get balloons to our minds. The reason for using this gas in balloons that carry humans is that it is lighter than air and it does not burn. Another important reason is that it will not produce any chemical reaction with other elements. As it is safe, it is used in the production of balloon animals for kids. Even, this gas is used for medicinal purpose and even military services use this gas.

In the year 1868, an astronomer from France, found a mysterious element, which is presently called as helium. This was done by the Astronomer in the gamut of the sun during a most-expected total eclipse that took place in Guntur. Earlier, this element was never found on earth and this is why it was pointed out as extraterrestrial element.

A long wait by astronomers:

Before the discovery of helium by the French Astronomer, many astronomers had been eagerly waiting for a total solar eclipse right from the year 1859. During this waiting period, the German Physicist named Gustav Kirchhoff identified how to make use of the analysis of light for identifying the chemical composition of the Sun and the stars. They thought of analysing the bright red flames that came out of the Sun and these red flames are now called as thick smokes of gas or solar prominences. But until the year 1868, they thought that the spectrum of Sun could only be observed during a full eclipse day.

The wait was over:

The French astronomer, who discovered helium stayed at Guntur on the solar eclipse day to get a site of the moon passing in front of the sun and showcased solar prominences. He found that the prominences were mostly made out of extremely hot hydrogen gas. But, he also found something extra with the help of a special instrument known as spectroscope. He found that the yellow light that was previously identified as sodium does not match the wavelength of the elements that were discovered earlier. 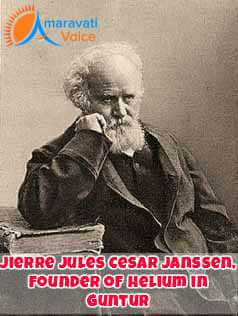 Janssen decided to continuously study the mysterious line and he was surprised to know that it will be possible to see the Sun’s emission not just during an eclipse day, but also during normal days. But, to view the same during normal days, it is important that the other visible lines should be emitted. With continuous research, he found a device called as spectrohelioscope, which is specially used for examining the spectrum of light from the Sun.

Without knowing the fact that French astronomer is working on finding helium, another scientist was engaged in the same research activities at a distance of about 5000 miles. This scientist named Joseph Norman Lockyer, actually thrived in his view of solar eminences in normal day light in the year 1868 on the month of October. In an unexpected scientific sync, the research papers of both these scientists reached the French Academy of Science that too on the same day. This is why both men were credited for first sighting of helium.