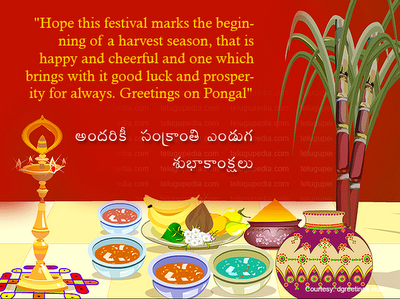 Description: Sankranti is a festival that is celebrated in different names in different part of India and let us understand it’s significance in the state of AP.

When it comes to Andhraites, Sankranti is a festival of great grandness. For many people the very term ‘sankranti’ brings into mind several enjoyable things like listening to devotional songs sung by Haridasulu, bhogi pallu, which is followed as a manner of blessing kids, bhogi mantallu otherwise known as bonfire and many other things. For some, this is a festival for new clothes, gifts, friends, family and gatherings.

How is the festival called locally?
The local people in Andhra Pradesh call this festival as peda panduga, which means big festival. As it is the harvest season, people who are settled in other parts of the country visit their home to celebrate the festival with their family and friends. When celebrated in traditional manner, this is a festival that is spread over three to four days and each of these four days are given separate names, even though, they are jointly called as Sankranti. The names involve Bhogi, the first day, Makar Sankranti, the second day, kanuma, the third day and mukkanuma, the fourth day.

The Sun connection:
The celebrations are conducted for the first three days all over the state and the second day of this festival marks the occasion of the entry of Sun into Makar Rasi or Capricom star. Starting from this day, the Sun rotates its ascent and gets into northern hemisphere.

This movement of the sun denotes the end of the winter season and special significance is given due to the starting of uttarayana. It is also the period of commencement of the new Hindu almanac of an auspicious phase.

What happens the previous month?
In the month immediately preceding Sankranti, during the Hindu month called as Dhanurmasam, women draw huge rangolis and they follow the practice of placing the gobbemmalu in the middle of the rangoli. This gobbemmalu is nothing, but a ball made out of fresh cow dung, which is decorated with attractive flowers before placing in center of the rangoli. Even, in some places, women sing songs and dance around the rangolis. The gobbemmalu placed in the middle of rangoli are then dried and are used as fuel. Bhogi, which is the last day of the Dakshinayana is celebrated with traditional bonfire, which is lit early in the morning. To showcase of the end of a phase and the beginning of a fresh phase, cow dung cakes, wood and even some unwanted stuffs are burnt in flames.

Blessings to kids in the evening:
During the evenings, young children are showered with a combination of flower petals, jujube berries and coins as blessings for their wellbeing. On this occasion, women prepare a lot of sweets in their homes in traditional manner and distribute the same generously.

On the second day of the festival, women prepare sweet pongal and offer the same to the Sun.

Third day is considered as the day to honour the great contributions made by cattle to farmers in fieldwork. The cattle are decorated, worshipped and they are fed pongal.

Bommala koluvu:
Similar to the navrathri festival celebrated in the state of Tamil Nadu, the festival called as Bommala Koluvu is celebrated on all the days of Sankranti, during which replicas of gods and goddesses are displayed. However, only a few traditional families are following this culture nowadays in Andhra.

History of Bommala Koluvu:
This tradition is something that dates back to the era of King Janamejaya. For the Bommala koluvu children are invited and gifted sweets and even in some families kids and women arrange the dolls in attractive and thematic fashion and invite their neighbours and friends. The idea of display of idols is something connected with escorting the uttrayanam with all gods gathered in the house in the form of idols. This is a tradition that will keep kids engaged, besides acting as the opportunity for parents to take up the traditional values to the next generation.