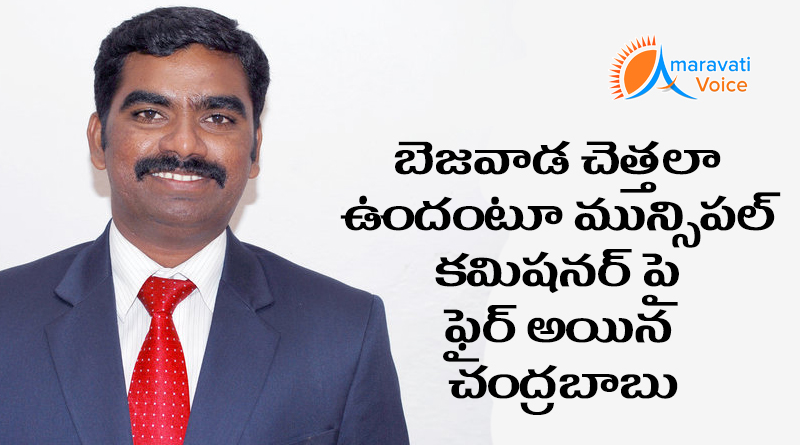 The TDP president and state CM N. Chandrababu Naidu gave class to the commissioner of the Vijayawada Municipality over the cleanliness of the city. The class was as said “How many times to say? Learn from the greater Visakha. The city is worst. Except Bandar road and Eluru road wherever we see we are finding municipal dump yards beside the roads. You are not changing even after getting warns. Then I have to clean the city.”

To discuss about the Pushkara snanam in the Krishna district in the previous week AP CM N. Chandrababu Naidu, Municipal minister, Mayor, Commissioner and other officials have attended the meeting. It came to know that while the discussion of the cleanliness of the city NCBN has fired on the Municipal Commisioner G. Veerapandya for not responding on the cleanliness in the city. Also municipal minister P.Narayana is also fired by the NCBN as he does not respond on the sanitation in the city which is left unworthy. But in Swacha Bharat the city stood in the 22 position which is not convinced to the NCBN.

Since the monitoring of the cleanliness in the city was not done by the officials the Prajaarogya branch has not been showing interest in the work and started working improperly. The AMOHs instead of monitoring the sanitary work are sticked to their offices. The Sanitary Inspectors and others are getting corrupted as well says sources.

Even though the complaints are given to the Commissioner, the municipal staff is left with small consequences. Also the complaints were given on the corruption, where these people are left with only consequences. Let’s see how the actions will be taken with the involvement of Chief Minister. The greater Vishaka which is not good in sanitation has changed completely with the involvement of Chief Minister. So, now let’s see how the city will change with the warning given by NCB to the officials.