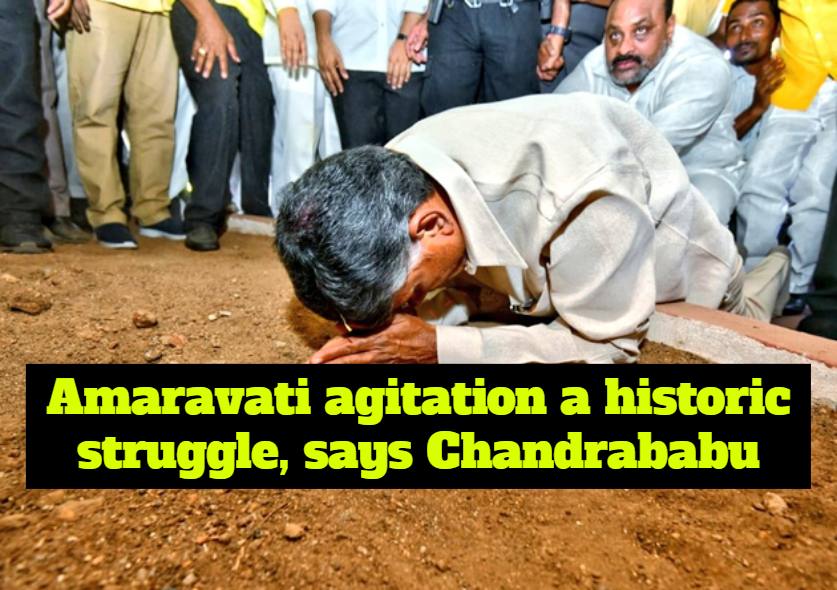 AMARAVATI: TDP National President and former Chief Minister N Chandrababu Naidu on Friday said that arrests, humiliations, lathicharges and caste-based attacks marked the Amaravati agitation which entered the 150th day today.He lauded the indomitable spirit of farmers, farm coolies, women and others who were courageously facing all sorts of atrocities being perpetrated by the YSR Congress Party Government. He said that they were all fearlessly agitating for the cause of saving and protecting Amaravati Capital City.In a message on twitter, Mr. Naidu said that Amaravati struggle would go down in people's memory as a historic agitation for a right cause. It may be recalled the Amaravati agitators were continuing their protests during the Coronavirus lockdown restrictions by strictly following Central government guidelines. The protesters wore face masks, used sanitisers and maintained social distancing norms at their dharna camps in their villages.In another message, Mr. Naidu condemned the arrests of party leader Bandaru Satyanarayana and other leaders by the police when they made efforts to visit RR Venkatapuram which was affected by LG Polymers gas leak. If everything has come back to normalcy, why were members of the opposition not allowed into the area?"I am receiving credible news reports that the Government has failed to contain the spread of poisonous gases in the aftermath of the leak. People are talking about a higher ranked police official who participated in the relief efforts being hospitalized," the TDP Chief said.Mr. Naidu further asked when ministers can spend time doing photo shoots, why were TDP leaders not allowed to meet the affected people and find out their problems. "What is the Government hiding? Why is YS Jagan Mohan Reddy playing with the lives of thousands of residents?" he questioned.Expressing shock over the Prakasam district fatal mishap, Mr. Naidu conveyed his condolences to the bereaved families and demanded that Government to respond with a humanitarian consideration. Within a week of 12 persons perishing in Vizag gas leak, the tractor mishap took place near Raparla village in Naguluppalapadu mandal claiming 9 lives of agricultural coolies. He demanded proper medical treatment to the injured coolies.