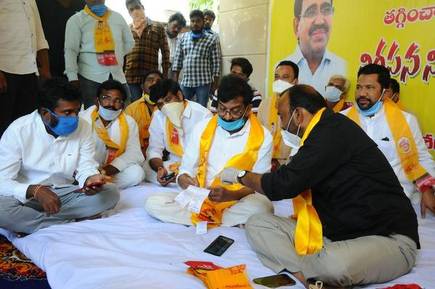 AMARAVATI: Telugu Desam Party former Minister Devineni Umamaheswara Rao on Friday deplored that the Jagan Reddy Government had waived Rs. 187.80 Cr worth power bills for the industrialists while not extending a similar gesture for different sections of people who were suffering financially due to Coronvirus impact.He said that the Government was spending crores of rupees on advertisements but no effort was being made to rescue the ordinary consumers. The ruling party turned a deaf ear to Opposition demand for waiving bills for 1.35 lakh ordinary consumers.Addressing a virtual press conference here, the TDP leaders said that the latest High Court order for CBI investigation into Dr Sudhakar case was a slap in the face of AP Government. He pointed out that the HC commented on the magisterial enquiry finding injuries on the Dalit doctor while the Government report did not mention the same. Now, Chief Minister Jaganmohan Reddy should answer for his inefficiency and negligent attitude that forced police in three districts (Kadapa, Guntur and Visakhapatnam) to face CBI probes.Mr. Devineni Uma demanded the CM to explain to the people why his Government suffered setbacks in over 64 cases in High Court and Supreme Court. The High Court has struck down GO on colours and asked the Chief Secretary, Panchayat Raj Secretary and engineers to remove the YCP flag colours from Government buildings and submit compliance reports before May 28.The TDP former minister said that YCP unveiled another big scam to hand over Rs. 500 Cr worth sand works in Polavaram project to its favoured contractors. For this, the powers of AP Engineer-in-Chief were clipped and transferred to his subordinates in order to freely commit irregularities in the project works. TDP spent Rs. 63,373 Cr in five years and strove hard for over 62 irrigation projects, but the Jagan Reddy Government was not in a position to speak out how much it had spent on which project.Mr. Devineni Uma said that Irrigation Minister Anil Kumar did not anything except to use objectionable language against rivals. Finance Minister Rajendranath Reddy was not in a position to tell facts to people on the Government revenue and expenditure. Even the media came under attack by the ruling party now. The credit for crippling all the four pillars of democracy in Andhra Pradesh would only go to Jaganmohan Reddy in just one year time.

Power bills waived for Crorepatis but not poor people: TDP Last Updated: 22 May 2020