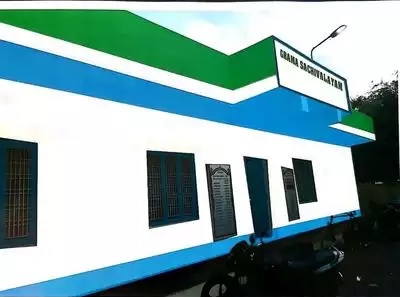 AMARAVATI: Former Chief Minister and AP Opposition Leader N Chandrababu Naidu on Wednesday demanded the YCP Government to disclose how much public money it had wasted for applying its party flag colours to the panchayat offices and government buildings in Andhra Pradesh till now.He termed the latest Supreme Court order as evidence of the adamant attitude and flagrant violations of the Constitution and the rule of law by the Jagan Reddy Government.In a statement here, the TDP chief accused the Government of committing one violation after another in utter indifference to even the courts' orders for the sake of seeing its party colours on public premises. First, they applied three colours of the ruling party. When the High Court ordered for changing the colours, the Government approached the Supreme Court which upheld the High Court order. Again, the Government came back to the High Court and applied a fourth colour insignificantly at the bottom.Mr. Chandrababu Naidu pointed out that the YCP Government dragged on the issue with its misinterpretations and untenable arguments in the courts. At one point, the High Court had taken a serious view and ordered the Government to remove all the four colours. Even then, there was no compliance of the court's order. The court even ordered for the appearance of the Chief Secretary, Secretary and the Commissioner. Now, the Supreme Court ordered for the removal of the four colours within four weeks. All this was because of the dull-witted and thoughtless policies of the ruling party that reached a peak now.Mr. Naidu deplored that crores of public money was being wastefully spent for implementation of useless programmes being taken up by the YCP. For arguing in the Amaravati Capital City case, the Government paid Rs. 5 Cr to the advocate. It was not known how much they had spent for the colours' cases in different courts. It was evident that hundreds of crores public funds were spent for applying three colours and then adding one more colour. Now, additional expenditure would be there for removing these colours in accordance with the latest court orders.The TDP chief demanded that all the expenditure already made and to be made by the Government on colours should be recovered from the ruling YCP and those officers who were blindly carrying out its irrelevant orders. The people of AP should not be punished for the dumb mistakes that were being made by the ruling party. It is pitiable that the Government and officials were facing contempt issues in both the High Court and the Supreme Court.Mr. Naidu asked whether CM Jaganmohan Reddy had taken One Chance from the voters in the 2019 election only to waste public money on programmes like YCP colours on public offices and to make the state bankrupt. The inexperience and inefficiency of YCP Government was evident from how it has been making countless mistakes in order to cover one wrong deed. The ruling party's non-stop failures in all aspects were proving to be a big threat to the future of Andhra Pradesh.The former Chief Minister said no leader has ever thought of applying his party colours on government buildings in the country's history till now. This Government has no minimum understanding that the law would not accept such party colours considering the fact that people cutting across political and social affiliations visit to avail services at government offices.