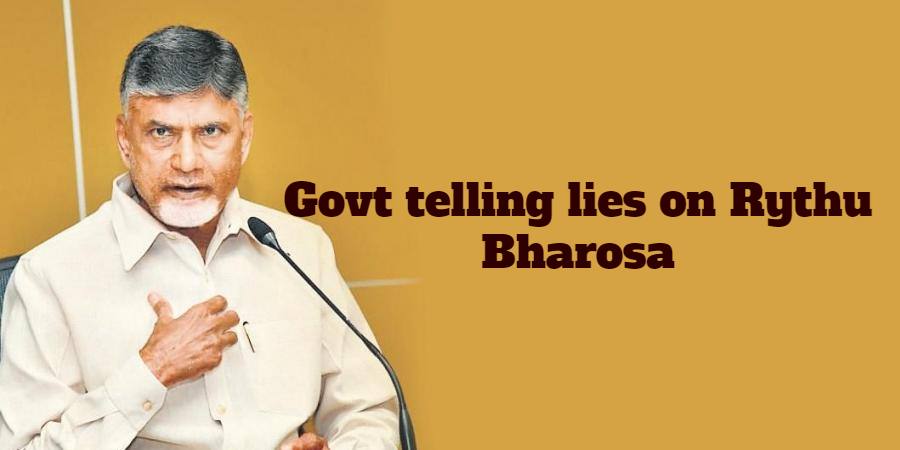 The TDP Chief held an online conference with party mandal presidents and senior leaders when he said that the present Government was making grave mistakes in an unprecedented way. False cases were filed and atrocities were being committed on TDP leaders, opposition parties, social media activists, ordinary public, employees and even on the family members of Visakhapatnam gas leak deceased persons. The Centre has given 3 months ration and assured it for two more months but the State government has not shown any concern for poor people.

Stating that the Centre bore 85 per cent rail charges for migrant workers, Mr. Naidu said that the poor families had walked hundreds of kilometres to reach home but the State Government has not come forward to provide any relief. If Anna Canteens are continued, their hunger problems could have been solved. Some migrant workers died on the way and their families would have got Rs. 10 lakh compensation if there was Chandranna insurance cover. Nagaland has announced Rs. 10,000 for migrant workers while Delhi has already given Rs. 5,000. Kerala has given door delivery of 17 items of ration. Different states have given additional assistance to the workers but AP has totally ignored migrant labourers.

The AP Opposition Leader asserted that a legal struggle would be launched against the Government for not paying bills under National Rural Employment Guarantee Act (NREGA) on priority basis. The Central Government has released necessary funds and AP has over Rs. 6,000 Cr material component funds with it. The Centre and the High Court have given orders to pay the bills already but the ruling party is behaving in an adamant manner. The TDP would fight for making NREGA payments with 24 per cent interest. All documentary evidence with measurement books should be sent from every mandal.

Mr. Naidu expressed concern that in the last one year, funds were being withdrawn without any records and without holding even grama sabhas or social audit. Close vigil should be placed on YSRCP leaders' shady activities and those reports should be sent. In the name of land acquisition for house sites, the ruling party unrolled another scam in buying and levelling of low-lying lands. YSRCP leaders were sharing the booty after selling Rs. 7 lakh worth land for Rs. 70 lakh to the Government. What more, poor families' assigned lands were forcibly snatched away. Ruling party mafia has cropped in every assembly constituency.

Mr. Chandrababu Naidu deplored that Build AP has been converted into Sold AP as YSRCP leaders have put up a wholesale sale of AP to loot hundreds of crores in the name of poor people's house sites. Prime lands allotted for hospital expansion in Guntur were being sold away and also police quarters in Visakhapatnam. No Government anywhere in the country has ventured to sell away lands of Collectors' offices, hospitals, market places and police quarters. Selling away existing properties only reflects the bankruptcy of the Government at a time when there are already dearth of public properties.

Mr. Naidu deplored that in just an year, Rs. 81,000 Cr loans were taken by AP but all these funds went into the pockets of YSRCP leaders and not a single developmental project was implemented. Whereas, TDP constructed Polavaram and Amaravati projects and implemented Anna Canteens and many welfare schemes.

The TDP Chief expressed his solidarity to Amaravati farmers and farm collies whose agitation has reached 150 days today. By sacrificing 33,000 acres of lands, the Amaravati farmers have helped create Rs. 1 lakh crore potential for AP Government in the Capital City area. But, Jagan Reddy Government has failed to realise the greatness of such sacrifices.