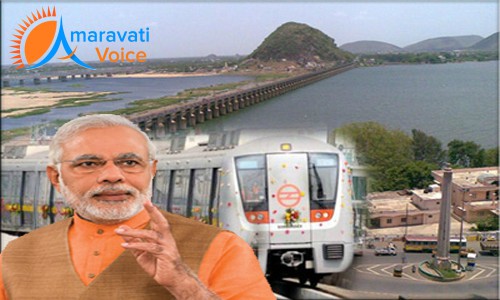 This is a super surprise and a big boost to Vijayawada Metro Rail Project. Prime Minister during his interaction with all states principal secretaries spoke about Vijayawada Metro Rail Project. Prime Minister asked the officials to keep special focus on the metro rail project and expedite the work. As the project is being monitored by the PMO, officials are very happy that, the project would speed up.

Delhi Metro Rail Corporation (DMRC) is intending to take Rs 3,600 crore loan from Japan International Cooperation Agency (JICA). To take this loan, Center permission is necessary. As Vijayawada metro is in the PM's priority areas, it is expected to help the loan proposal get the Centre's clearance early.

In the same meeting PM also appreciated the work of EPos, through which public distribution system and other social welfare activates are done. Modi asked other states to emulate AP on this. Krishna district collector Ahmed Babu, who implemented EPoS successfully, has been asked to meet the PMO officials to present finer details.