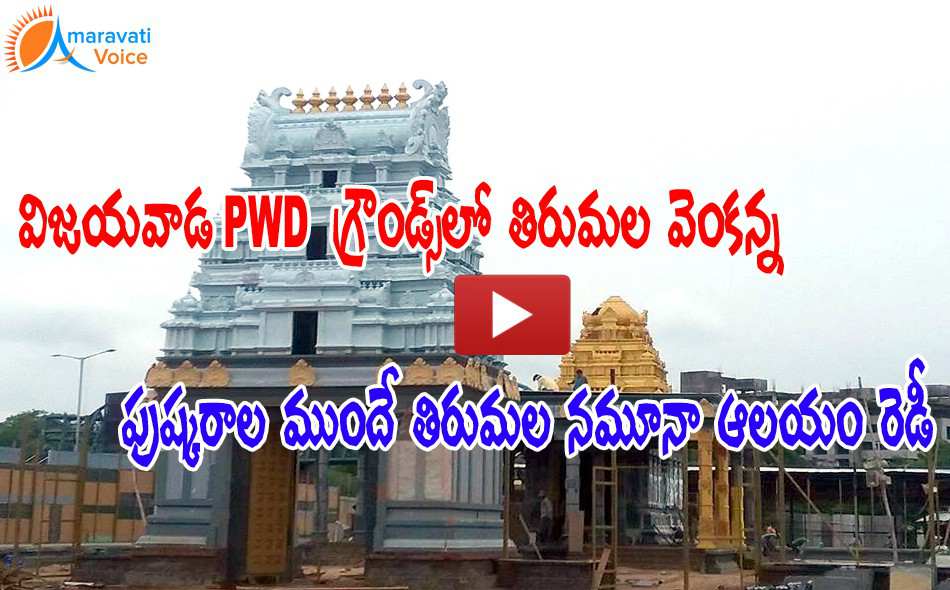 The Tirumala Tirupati Devasthanams has begun building a replica of the Tirumala temple at the PWD Grounds in Vijayawada, for Krishna Pushkaralu. The replica, having a width of 82 feet and height of 130 feet, will be built on 4.8 acres. Earlier, it was estimated the replica would cost & 2.5 crore but now the estimation has risen to 3 crore.

The replica temple of Lord Venakteswara will be open for the darshan of pilgrims from August 7. All rituals performed at the Balaji temple on Tirumala would be performed in the replica temple too. For this, a team of priests from TTD Devasthanams would be arriving in the city.

The temple premises will be under the surveillance of CCTV cameras as more than 75,000 pilgrims are expected to visit it everyday. The counting of money collected in hundis will also be carried out amidst tight security, just as is done at the Tirumala temple.

The devotees will be offered chakkera pongali, pulihora as prasadams apart from mini Laddu as prasadam after having the darshan of the Lord at the replica temple. Anna Prasadam will also be organised for nearly 25,000 pilgrims daily, throughout the 12-day river fete. Over 1,000 Srivari Seva volunteers, scouts and guides, apart from 800 other personnel have been deployed on duty for Pushkaralu by the TTD at the temple in Vijayawada.

CM N. Chandrababu Naidu has allotted PWD grounds to erect the temple as it is located centrally in Vijayawada, The temple will attract many pilgrims during the 12-day event. The Dasa Bhajana round-the-clock will be another highlight. On August 7, the temple will be opened after performing agama rituals.