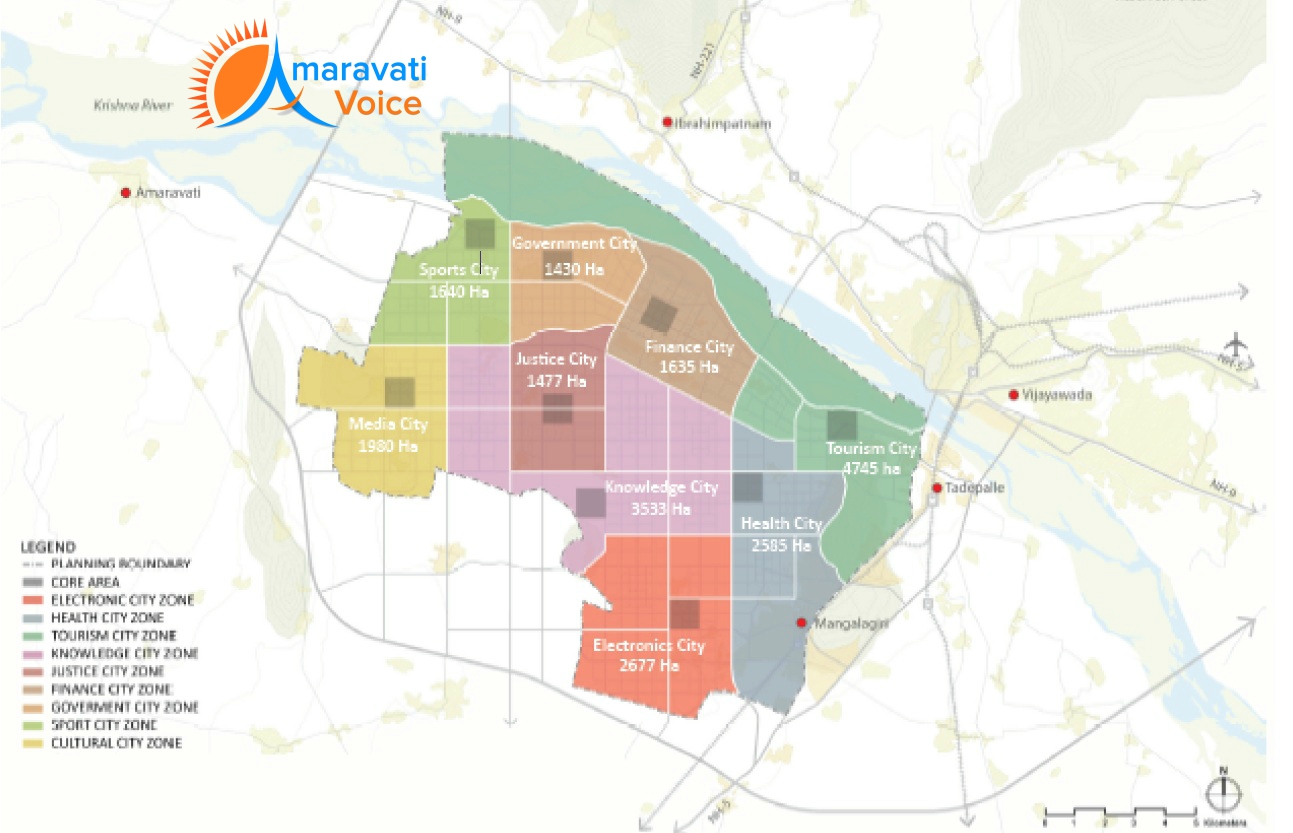 1. Government City
In line with Vastu principles the Government City is planned along the north-south cardinal axis. Housing several government functions and residential areas the city covers a land area of about 564Ha encompassing 2 medium to high density townships that support the central government core. A central green ceremonial axis will bind the numerous Government city functions together. The ceremonial axis will be marked by the state assembly and a large public waterfront plaza at either ends of the green axis. The city will also house a large number of government residences and mixed use developments.

5. Electronics City
Planned in the south, the Electronics City will thrive on the well established IT and electronics industry in southern India. Covering a land area of 731 ha the city will create over 2,73,500 skilled jobs in the Amaravati Capital city. The electronic city will have a well balanced mix of industrial and commercial areas as it houses the third Regional centre of the Amaravati Capital city which is supported by 752 ha of industrial land.

6. Health City
A dedicated Health city compliments the well distributed health facilities across the Amaravati Capital city. The primary focus of the Health city core is to provided super specialty clinic and hospitals that provide residents with a one stop centre for overall wellness and wealth. The Health city core is planned to the high speed rail station and regional centre so that it is easily accessible to people from the Capital region as a whole. This is will help will help in further facilitating the rural and sub urban towns within the Capital region. Covering a land area of 1349 Ha the Health city will create 1,05,000 jobs in the health industry.

7. Sports City
Planned along the north western riverfront, the sports city is aimed to be a dynamic waterfront attraction accommodating large stadiums, arena and event venues for international scale sports events. The sports and recreational attractions will be supported by complimentary commercial and mixed use developments to facilitate the spectators of these venues. Covering a land area of 650 Ha the sports city will provide the Amaravati Capital city with an edge within southern Indian subcontinent in the sports and recreation industry.

8. Media City
The Media and Cultural city is planned close to famous temple town of Anantaaram. Covering a land area of 677 Ha the city will accommodate 2.54,071 residential population. A regional centre strengthen the commercial backbone of the media cultural city creating over 105,000 jobs.

9. Tourism City
The Tourism city is planned in proximity to the historic Undavalli caves along the river Krishna waterfront. Interestingly the Tourism city is also well connected to the scenic Kondaveeti vagu and the primary green network of the city. Housing numerous tourism and cultural facilities, the Tourism city cover a land area of 531Ha and accommodates about 1,33,335 residential population within the Capital city. Several city level water tourism facilities will be planned along the waterfront and the islands to provide tourist with captivating views ans serene environment.