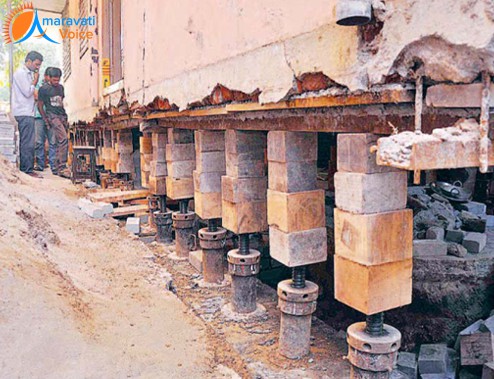 We have seen many incidents of these kind of news in TV. But now this happened in our Guntur. The house of G.V.Seshagiri Rao, who is residing in Guntur, has built his house in 1989. He wanted to raise his house by 3 feet, as the roads have been raised in height and his is house in lower level. Because of this drainage was getting stagnated. Mr.Roa thought to re-construct his house, but he came to knew of the latest technology of house-lift.

He has consulted many companies, by finally he handed over the project to Mamchand and Sons of Haryana. He consulted their Chennai Branch and agreed to lift the house in 23 days for a cost of 5 lakhs. It has easily saved 15-20 lakhs to Mr.Rao, without re-construction. The procedure involved 240 jacks being fitted beneath the basement beam on four sides. They have lifted upto 3 feet, without incurring any damage.